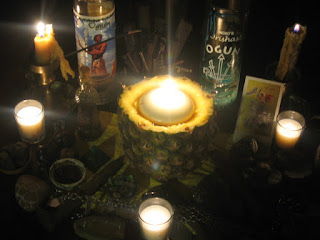 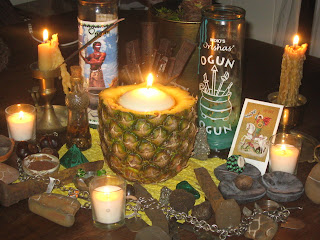 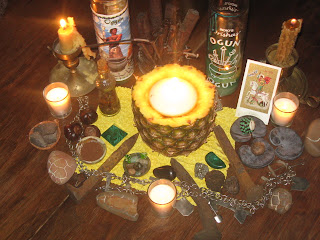 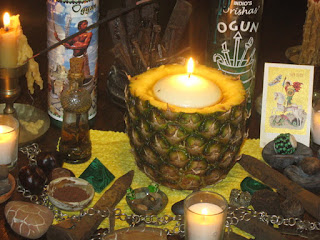 Ogun is the god of war and iron of the Yoruba people of West Africa. In Yoruban lore, Ogun and the other gods climbed down to earth on a spiderweb. When creation was completed, the gods realized that people needed to clear more land in the forest where they lived. Unfortunately, the only tools available were made of soft metal, a material not suitable for cutting down trees. However, Ogun had been given the secret of iron by Orunmila, son of the supreme god Olorun, and he used an iron ax to clear the forest. Ogun later shared the secret of iron with the other gods and with humans. He also showed them how to shape the iron into weapons. Cauldrons, iron objects (such as nails) and tools, machetes, and dogs are sacred to him. His colours are green and black. His altar, which consists a small iron cauldron filled with roots, seeds, and iron objects like old nails, railroad spikes, horseshoes, etc. It should be placed behind your front door and anointed daily. He enjoys silver coins too, I have found.
Ogun can be called upon for political action, this is common in Haiti, and for employment. He has never let me down concerning employment issues. His corresponding saint is usually St. George but is St. Peter in Santeria and Palo tradition. It is said that a woman on her menstrual cycle should abstain from invoking Ogun.
He is a powerful god and will help those who pray to him. Yoruba blacksmiths have traditionally sacrificed dogs to Ogun, and each year they hold a three-day festival in his honor.
He is the father of metamorphosis, because with his great strength, will and with the aid of his intense power, he transforms carbon into diamonds and sandstone into marble. His cauldron is the symbolic of a womb, a mine, the primordial abyss, and the tools which kept inside it are used by Ogun to fashion or shape what is inside into the precious piece of the divine it is meant to be.
Ogun clears our paths with his strength and tools. Any obstacle you encounter, He can clear it for you. Welcome him into your home, give him honor when you build or create something new, and he will continue to bless you with transformation and prosperity.
If you are struggling with change, creativity, success, discovering your skills, or to find direction, petition Ogun and let him lend you his aid.
Ashe'
Posted by Conjured Careda at 10:14 PM