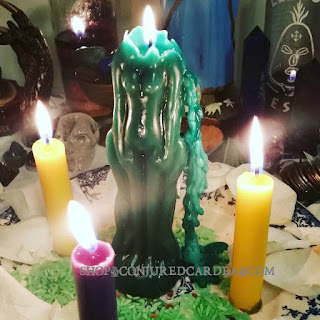 I refer to this as "Devil on the Shoulder". When this flow appears, it is early in the process of the work and produces an angluar, almost detatched flow on one side of the candle. It appears as if the wax has tried to leap away from the work. This is a sign of a heavy, direct blockage being removed. If it is on the left of the figure candle, it is an old blockage. If it is on the right of the figure candle it is a recent or soon to appear blockage. In either case, it is an indication that the work will fulfill it's goal quickly and that the blockage is already being attacked and removed. 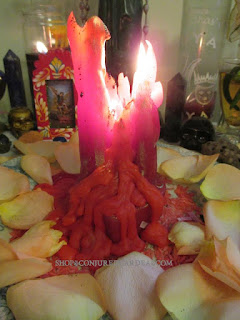 The "Crossroads" flow in candle wax divination. This flow shows us four major paths that alternate and overlap. Each side takes it turn to produce two flows that alternate with the other, one at a time. This flow represent an emotional bond, a meeting of minds and a transition to a new, higher, positive place. It is also anticipitaory of a physical meeting.

Posted by Conjured Careda at 11:17 AM No comments: Links to this post

Part II of my Interview for the Pagan Business Network

I hope you all enjoy Part II of my interview with Pagan Business Network! 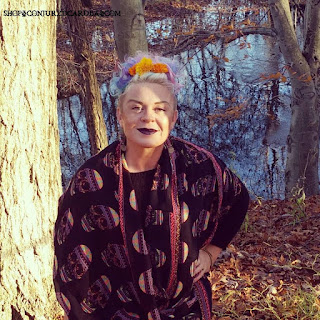 Posted by Conjured Careda at 8:50 AM No comments: Links to this post

Part One of my Interview for Pagan Business Network

I hope you all enjoy part one of my interview for Pagan Business Network! http://pbnnewsnetwork.com/2016/07/14/capturing-time-with-moma-sarah-in-the-beginning/
Posted by Conjured Careda at 12:26 PM No comments: Links to this post